SmartLVL 15 is the next generation in Laminated Veneer Lumber (LVL) as it allows smaller cross sections for the same properties of LVL. Conventional lumber is prone to warp, twist or shrink, whereas SmartLVL 15 stands strong due to its composite nature and uniformity. The veneers are dried and the grains of each veneer are placed in the same direction before lamination. This is the reason that LVL is stronger, straighter and has more uniformity than solid timber. It does not come with timber’s limitations such as the ever occurring strength-reducing knots. Similar to plywood in appearance, SmartLVL 15 is much stronger due to its orthotropic properties, which is much like the properties of sawn timber, as compared to plywood’s isotropic properties.

SmartLVL 15 has the following properties:

Maximum floor load width by either outside member (mm) 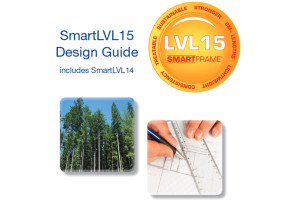